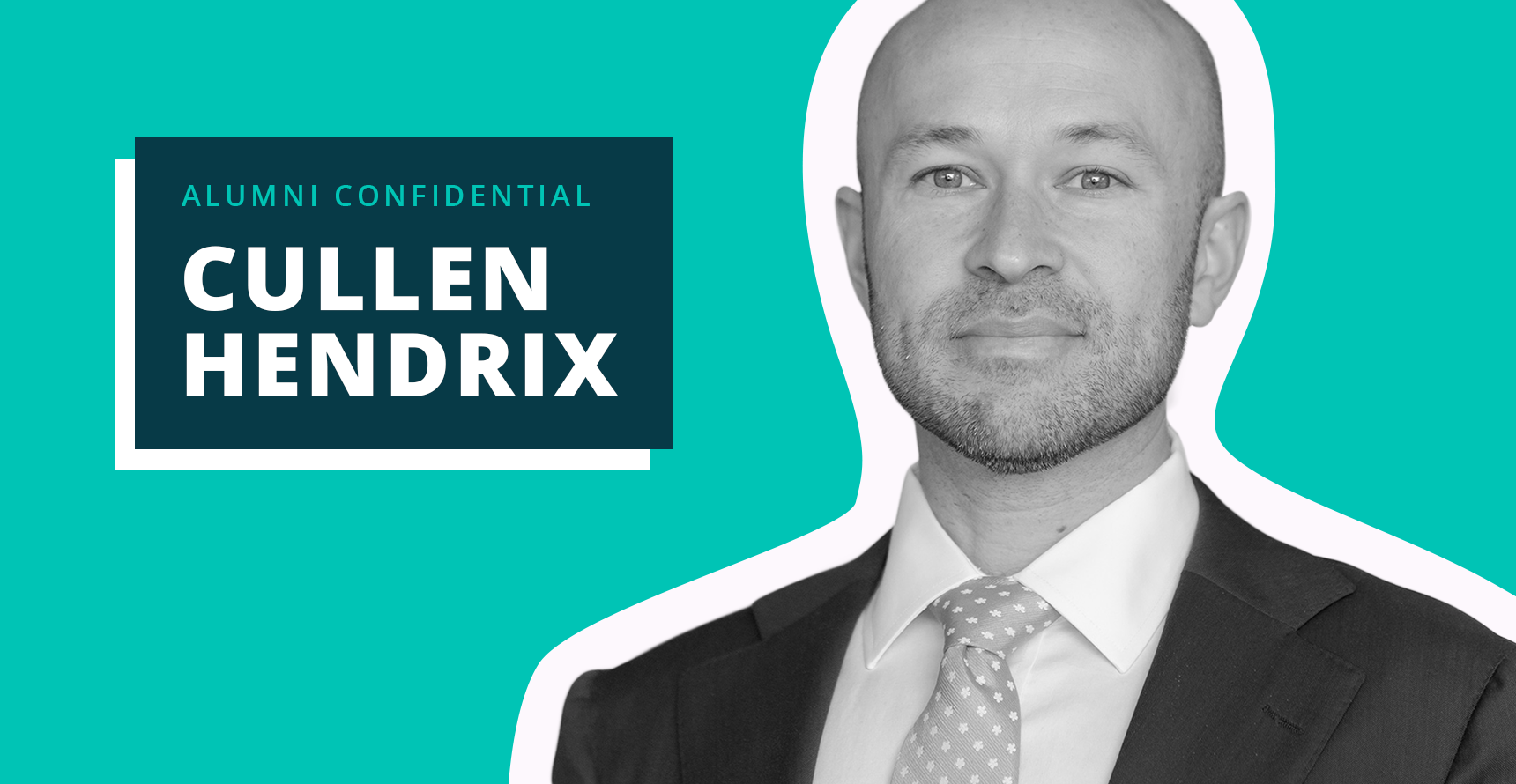 In our latest Alumni Confidential, we talk with Cullen Hendrix, a professor at the Korbel School of International Studies at the University of Denver who works at the intersection of climate change, food security, and conflict. A past IGCC dissertation fellow, Cullen also serves as a senior fellow at the Peterson Institute for International Economics and a nonresident senior research fellow at the Center for Climate & Security. In this interview, Cullen reflects on how social science research on climate change and conflict has changed over the last ten years, why policy engagement is still viewed with skepticism within the academy (but is important anyway), and how he stays productive and hopeful despite the breadth and depth of the problems he studies.

You have spent the better part of your career conducting social science research on a whole range of issues that revolve around what drives conflict. Where did you first discover that you were interested in the world beyond the United States? And what was it about conflict that drew you in?

I have a very visceral memory of a time when I was probably somewhere in the vicinity of seven or eight years old, and I saw, for the first time, images coming out of the great Ethiopian famine. These were images of children who were displaying the classic symptoms of acute food insecurity and starvation: emaciated bodies, distended bellies. I was shocked because I was looking at people who were my age. It didn’t seem fathomable—I’m not sure I could articulate the emotions I felt about it.

Both my parents were ministers and were relatively straightforward with me about what was happening there—that there was a war and the war was creating hunger and the hunger was related to drought. You can extrapolate from that virtually every component of my career, in terms of trying to understand the relationships between food insecurity and conflict and the ways in which our natural environment shapes human institutions and human interactions and vice versa.

As I got older, I spent time studying in southern Mexico, and became captivated by the puzzle of why it was that these people around me who seemed a lot like me were living in radically different circumstances from me in terms of economic development. It was the twin interest in issues of hunger and the environment and conflict, and trying to understand the origins of economic development, that drove me to radically switch course from thinking I wanted to be an attorney.

IGCC has a new research strand on the security implications of climate change, something you have worked on extensively from several different angles, including work on the relationship between food insecurity and armed conflict; whether climate change is likely to drive increased terrorism, the impact of climate change on fisheries conflict, and oil and conflict. How has the field changed over the last 10 years?

First off, it’s exploded in size. It went from being a relatively niche field, [to a key component of] the study of international security, and peace and conflict studies in the United States and Europe.

Ten years ago, whether short-term climate events had effects on peace and conflict was a pretty open question. Now, the theoretical and empirical linkages between climate change and a variety of related phenomena including peace and security outcomes are well substantiated, [to the point] that it has become a mainstream issue for the security community in both academia and the policy world. An example of this is the journal Security Studies, which has historically been a very traditional journal focused on “big S” security issues. This year it is devoting a special issue to the security implications of climate change. Today, there’s an interdisciplinary ecosystem of people who are just focused on this.

Your research is what we call very policy-engaged, and you have written a fair amount on how and whether research influences policy, and how academics can better engage with decision-makers. Why should academic research influence policy? Why is that a good thing?

I don’t think all academic research needs to or should be policy engaged. I value basic research for research’s sake. My personal commitments, though, lead me to the belief that the work I do should be useful to society.

And it’s incumbent on me not to sit around and wait for society to embrace what I’m doing, but to try and find ways in which I can make what I’m doing legible to policy audiences and stimulate discussion outside of purely academic circles. I owe that to my community.

Under the auspices of IGCC, the state of California—the people of California—invested a lot of money in helping me become a relatively highly educated person. For that reason, I owe a debt of gratitude to spend my career addressing issues I think are important on both humanitarian grounds and security grounds. And to make sure that that information doesn’t stay hermetically sealed in the academic environment, locked away in the ivory tower.

In a 2019 Duck of Minerva piece, you wrote that “Policy engagement is still viewed with skepticism in many international relations departments.” Why?

Policy discussions by their very nature are a fast-moving target. And social scientists tend to like to study a phenomenon in a way that allows them to step outside of the comings and goings of daily policy debates, and engage with deeper structural determinants and fundamental precepts of how the world works. That’s what we’re trying to discover, and indeed, in the scientific world, we are rewarded for making those kinds of discoveries, as opposed to commenting on the issues of the day.

Another issue is that there’s skepticism about the motivations of people who want to insinuate themselves into policy discussion. There’s a belief that people who are interested in policy may be trading on their appeal to authority by virtue of their expertise, [and may be] engaging in essentially policy advocacy under the guise of social science.

At times, I think those are warranted concerns, and they revolve around the concern that, in order to be policy relevant, scholars might be willing to fudge on the details or bend their analysis to fit the desires of policy audiences, which would be a very negative thing for academia and would pervert the purity of the scientific enterprise.

I can buy those arguments. It’s just that, from my perspective, there’s a lot going on in the world.

There are real problems to be solved. And there are real benefits to engaging. And personally, I don’t think I could abide generating information and being satisfied with just bouncing it off other people with PhDs.

Although I still do a fair amount of that.

A perennial question is how does academic research influence policy? There are a million reports written about this. There are tons of events organized around this. We all want to know: what is the formula? There is no formula of course, but I’m curious about how it’s worked in your professional experience.

In my experience, it is not necessarily the case that my academic research, the journal article, for example, has impact. I think it is the volume of expertise and insight generated through the process of doing all that work.

Most policy practitioners, when they’re looking to engage with academics, are less interested in academic scholarship [than] they are in academic expertise. When I’m doing good work that I hear after the fact was consequential for a policy decision, it’s not happening because I said, say, on page five of my most recent report, I discovered x. It’s more that my accumulated expertise allows me to have an awareness of the general dynamics that are operating in the system, and therefore make reasoned conjectures that are a function not of just the scholarship, but of the expertise that the scholarship is evidence of.

You were a dissertation fellow at IGCC when you were a doctoral student, back at UC San Diego. What is the value of university-based think tanks?

A place like IGCC allows its researchers and affiliates to find a sweet spot between developing academic expertise and engaging in cutting-edge scientific debates, while also providing a platform—and incentives—for public engagement. But it’s not driven by the day-to-day news cycle. Even IGCC’s location, not being located in the beltway, gives people a bit of repose that they otherwise wouldn’t have for the kind of contemplation that it’s tough to do in D.C.

IGCC is also able to draw on the incredible intellectual horsepower of the UC system. It’s easy to forget that the UC system is the most astoundingly effective and successful investment in public higher education that has existed anywhere in the world. It really is something to behold. The fact that IGCC gets to draw on that expertise across disciplines is incredible.

You have described yourself as “heart masquerading as head since 1977.” As someone who cares about the topics you study, and given the seriousness of those topics, have you found a way to work on these issues productively day after day, year after year, and not get overwhelmed? How do you stay hopeful?

I reflect on that quite a bit, actually. This generation of students is looking around and seeing a variety of cascading problems in the world. And they are problems that seem so structural, so grand in scope that I think it can be very disempowering.

For me, the answer in a professional sense is: I am not going to be able to solve the world’s problems by myself. But if I get up every day to help bring ideas to the table and help shape the way in which major actors—everyone from the government, to NGOs, to conservation groups—think about these things, then I’m doing my piece. And that’s the only thing we can ask of anyone. Our piece may be small, and it may seem insignificant, but it’s not insignificant. It’s the only way anything happens.

One of the enduring challenges of the context we find ourselves in, is reminding ourselves that the world is actually an incredibly beautiful place. And that there’s so much good out there. We tend to overlook it because it’s not particularly dramatic or dignified. But nevertheless, if we open our eyes to it, we can be renewed by our sense of shared purpose. I can’t do it alone. I need to do it with my scientific collaborators, with my colleagues at the Peterson Institute. I need to feel embedded in these kinds of things. I’m a team kind of person. That kind of attitude informs my thoughts about how to stay engaged on important policy topics at a time when things aren’t looking great.

I had basically lost hope that we were going to get any significant climate legislation out of this Congress. And then I woke up one morning, and the world had changed. I then had a separate set of issues to think about in terms of implementation and how to build resilience—including solar supply chains in the United States—using all these fantastic resources that have been unlocked by the federal government.

So, if you’re in it for quick, easy wins, then policy work probably isn’t for you. But if you’re willing to move the ball a little bit every day, there are going to be times when those little incremental movements add up to something big and real change is possible.

Those are good words. Thank you, Cullen, it is so nice to talk with you.