What’s Economics Got to Do With It?

As part of the UC Institute on Global Conflict and Cooperation’s Great Powers initiative, Vinod K. Aggarwal, Travers Family Senior Faculty Fellow, professor of Political Science at UC Berkeley and director of the Berkeley APEC Study Center, leads research on economic statecraft, an increasingly central—but all too often ignored—aspect of geostrategic competition. Here he answers questions about the economic dimensions of great power competition, what his team is learning, and what to expect in 2020. 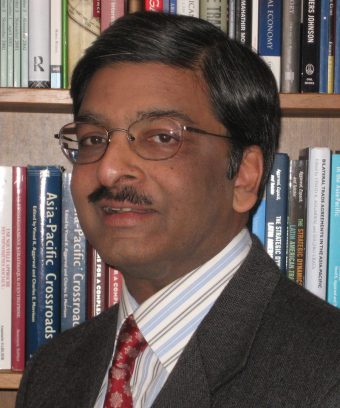 “Strategic competition” is a word with a fairly specific meaning denoting a return to great power competition—and the existential consequences of this competition.

Great power competition is itself an increasingly in-vogue term that harkens back to the United States’ rivalry with the Soviet Union during the Cold War. Today, great power competition centers on geostrategic competition between the U.S. and China, and to a lesser extent, the U.S. and Russia and emerging powers like India and Brazil. Key U.S. government documents—including the National Security Strategy and National Defense Strategy—have begun referring to strategic competition as being at the forefront of challenges we face as a country. The idea of an ideological struggle between Western democracies and Chinese and Russian autocracies is back as a framing narrative for U.S. foreign policy.

Both academics and policymakers have been predominantly focused on terrorism and counter-insurgency over the past two decades—rather than great power competition. And both have tended to focus on the military aspects of state competition. Economic concerns have often been largely ignored in academic discourse concerning both national and international security (with the exception of some work examining the use of economic sanctions as a tool of coercion).

Of course, this is driven to some extent by concerns about the security threats of today, rather than concerns about the security threats of tomorrow. Increasingly, though, we see states using economic policies, including the regulation of inward foreign investment, to pursue strategic sectors in the economy—with the military applications of new technologies (from artificial intelligence to cyber capabilities) central to state competition.

What makes IGCC’s research program unique, then, is that we are reconceiving the notion of strategic competition and great power competition as something much broader than just the military or defense sector, but rather something involving economic dimensions of state competition, domestic politics and hard security.

Insofar as strategic competition is about economics, there seems to be a narrative that the U.S. economic model is liberal and market-based, whereas China’s economy is protective and state-led (and that this gives the Chinese an unfair advantage in some cases). Is that accurate?

It is perhaps less true than we think. As my work on industrial policy in high technology industries with Andrew Reddie at UC Berkeley points out, government support for strategic sectors of the economy comes in a variety of shapes and sizes. It is indeed the case that Beijing has more substantial state control over the research and development occurring within its borders than the United States or European countries, but governments around the world use a variety of levers, from industrial policies to export controls, to manipulate market behavior to their benefit. For example, the Central Intelligence Agency actively operates in Silicon Valley by providing venture capital to startups through In-Q-Tel.

Is industrial policy and trading relations all about strategic competition or are countries simply trying to formulate smart economic policies for their own development?

This is a hard question. Faster growth and success in emerging technology sectors have both economic and security externalities, even if the latter are generally ignored. That said, government intervention in strategic sectors of the economy—managing foreign investment in high technology companies, for example—can actually have deleterious consequences for “development” by constraining the free movements of capital, goods and people that might otherwise achieve growth more quickly. Industrial policy actually was viewed very negatively until recently and its use still has its doubters. Import substitution industrialization (ISI) that blocked imports, a policy that was pursued by most developing countries after WWII, tainted the use of industrial policy as ISI led to industrialization but many of the industries that were created were highly inefficient because they faced no foreign competition.

Experts predicted that domestic forces would constrain President Trump’s aggressive economic (and other policies), but they haven’t. Is U.S. economic policy changing decisively under the current administration?

Trump’s policies can be seen as “aggressive,” but it is worth pointing out that when it comes to trade, the United States’ position offers some continuity along with change. For example, NAFTA has been replaced by the USMCA (the United States-Mexico-Canada Agreement), while the U.S. has pursued several bilateral trade arrangements. From my perspective, however, the bigger issue is the failure of the Trump administration to pursue both the Transatlantic Trade and Investment Partnership (a multilateral trade agreement between the European Union and the United States) and the Trans-Pacific Partnership, both mega-free trade agreements with important security implications.

One of the values of the kind of research you do is that it allows us to make sense of the world, and predict what might be ahead. But expert predictions can be wrong. When we look back in 10 years, what do you think we will have got wrong?

Amid the hand-wringing surrounding the deteriorating relationship between Beijing and Washington, we might hope that both states find themselves cooperating more than current experts predict.

What are the most important dynamics to watch vis a vis economic rivalry and great power competition in 2020?

It will be important to watch how the first phase of the trade deal between China and the United States plays out, and how it might affect the dynamics of the competition between the two countries. In the context of COVID-19 coronavirus, it is unlikely Chinese will meet their targeted imports. Moreover, the first phase fails to deal with a central concern of U.S. policymakers concerning Beijing’s support of State Owned Enterprises and domestic firms with close ties to the Chinese Communist Party. And while the agreement addresses forced technology transfer, it does not address critical issues such as hacking and data storage regulations. Whether the second phase of a trade deal between the two countries manages to address these issues is something that we will be watching over the coming year.