In this interview, Gregoire Phillips, a fifth year Ph.D. candidate at the University of California, San Diego and a 2019/2020 IGCC Herb York Dissertation Fellow, talks about why the Islamic State’s media campaigns have been so effective, what can be done to counter their influence, and a conversation with a taxi driver in Amman that changed the trajectory of his academic career. This interview has been edited for length. 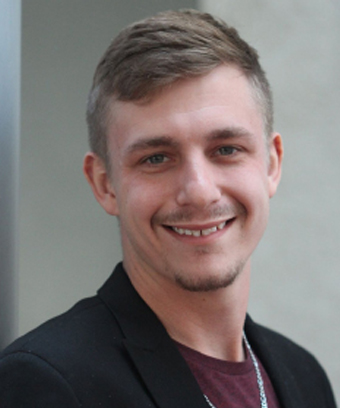 You study the ways in which armed extremist groups use the media to influence audiences and generate legitimacy. What got you interested in political violence and communications?

I was doing fieldwork in Jordan, and was predominantly based in Amman, the capital. One of the seminal sets of experiences I had were in cabs.

This was 2014 and, across the Middle East, one of the hot topics was the Islamic State—a huge organization that pops up virtually out of nowhere and starts taking down the Iraqi government and capturing territory in a way that groups before had been completely unable to do. They’re not just taking over rural areas on the outskirts of town. They are taking over large cities.

I remember asking how they knew what the Islamic State was doing, like: had they been over there? And both of them said: “Oh, no, no. I see what they do on the Internet.”

I was struck by how effective their online persona and branding was at influencing people hundreds and thousands of miles away, not just to believe something, but also to speak about it. And mind you, these were views that could get them in very deep trouble in Jordan.

The Islamic State produces myriad video and other content—which must be a treasure trove of data, from a research standpoint.

Usually, as an empirical phenomenon, propaganda causes a lot of problems: It doesn’t tend to survive very long because until 25 years ago it was all paper; it tends to occur in conflict zones where things don’t survive very well; and rebels have a very difficult time disseminating things. So it’s not surprising that we don’t have a lot of empirical work on propaganda because the survival of the data is fraught.

But even when their physical presence was waning, the Islamic States’ online presence grew over an extended period of time. And yes, one of the great things for a scholar is continuity of data.

How is the Islamic State unique relative to other groups?

Unlike Al Qaeda, the Islamic State is quite centralized in its leadership, and maintains a decent amount of control over what is done in its name. But, at the same time, it is a multi-state organization, with presence in radically different environments, and it has different goals and target audiences in these environments. While it is heavily invested in territorial acquisition in Iraq and Syria, their goal in Western Europe is quite different. They’re not trying to build an army to storm the barracks in Berlin. They are trying to get people who are vulnerable to pack their bags and come to Iraq and Syria.

Why is the Islamic State so good at influencing people? They come across as seasoned political operatives.

They invest considerably in messaging campaigns that are not only high quality, but also show the group investing in things people care about. So, they might produce a series of messaging campaigns, videos, and texts showing them rebuilding religious infrastructure or paving roads or putting up power lines.

Extremists face a dilemma: on the one hand, their leadership has committed itself to ideas that are much more extreme than the average person in the society is comfortable with, right? In order to gain followers from outside the group of people who share those ideas, the Islamic State needs to show people credibly and persuasively that it is willing to do things that have nothing to do with extremism. And they’ve done that very well.

Is there a way to effectively counter the influence of groups like the Islamic State?

You can do two things. One, you can stop their messaging from reaching people. And that’s easier to do if you know where that messaging is happening. If we invest our time in trying to prevent the dissemination of propaganda in Western European countries on YouTube, which is what Google and other tech companies are spearheading, we miss the fact that the Islamic State is most active among audiences in the Middle East and Southeast Asia, where we are not necessarily launching these efforts.

Until we can effectively counter the information warfare that these groups bring to the table, I don’t think we are going to be effective in the long run at stemming their influence.

Second, if we know that we are dealing with an organization that’s not marketing itself as the most extremist group on the block, but rather as a viable alternative to an ineffective government, then we can strategically counter that message by bolstering the perception of governance, instead of just saying “extremist groups are bad.” We don’t have a lot of evidence on the effectiveness of counter messaging on the ground, but when the U.S. government has done internal reviews of its own counter messaging strategies, it has found them to be woefully ineffective. And I think this is part of the reason why.

There are many ways to contribute to the world. What made you choose the academic route?

I have always been deeply interested in knowledge production. The way I tackle problems is usually pretty intensely analytical. The world economy could change and leave me, and all academics, with different choices. But I’ve wanted to be at the frontier of knowledge production and intellectual debate.

Do you think academic research can have an impact in the so-called “real world”?

I don’t believe in doing research that isn’t policy relevant. If I didn’t think what I was doing was relevant to what’s happening in the world, I wouldn’t be motivated.

What about being a Ph.D. student have you found most surprising?

I’ve had to find ways to make academia a social discipline. I wasn’t prepared for the isolation that comes with academia. That’s been the biggest challenge of being a researcher: balancing the need for community. I’ve learned to invest in surrounding myself with people.

What are some of the pitfalls of being a researcher?

Studying something that is steeped in a culture and a background that I do not share, I have to be very careful and very mindful of the ways I characterize people. So, for example, I personally find the Islamic State morally abhorrent, but I can’t spend my time as a scholar honing in on that. On the civilian side, I am very careful not to make assumptions about ideology or religion or culture when discussing the incentives they face. Making assumptions about why people support a group is a really dangerous game and can lead us to some really bad places.

Is the pandemic re-shaping how you think about life after Ph.D.?

With 26 million people unemployed [at the time of the interview], universities everywhere have cut their hiring lines. I would like to end up at a large public research university continuing to do work like this, and teaching on political violence in the information age. And I’m going to fight and apply for those positions. But I’m also thinking more about other ways to make a difference with the skills and knowledge I have that I would not have thought about four months ago.