International relations scholars from across the University California met on February 28, 2020, at the 5th annual University of California Conference on International Cooperation. Hosted by UC Riverside, participants discussed pressing global challenges that require global solutions, including deadlocked global trade negotiations, nuclear proliferation, and waning support for global governance structures. Such challenges underscore the importance of global cooperation and diplomacy in a highly interconnected world, characterized by a constant flow of goods, services, capital, people, and ideas.

With a focus on research as well as its implications for policy, conference participants discussed the power of international financial institutions and private financiers, the impact of domestic politics on international trade policymaking, the challenges of a multipolar nuclear world, public support for globalization, and the role of media in global conflict.

Conversations addressed history as well as current trends in global politics. Several papers investigated shifts and variation in public perceptions of trade policy and international economic institutions. Julia Morse (UC Santa Barbara) and Tyler Pratt (Yale) opened the conference by discussing the sophisticated ways in which countries protect their reputations and credibility when they are accused of wrongdoing abroad. Applying a framework from the field of public administration, the paper assessed how various forms of governmental contestation influence the way that domestic audiences perceive violations of international law.

Ryan Brutger (UC Berkeley) and Siyao Li (University of Pennsylvania) led a discussion about public frustration in response to international trade policy. They argued that the American public may see trade more favorably if it is facilitated by an international organization. Specifically, Brutger finds that Republican voters are more likely to support a trade agreement if the U.S. has veto power (i.e., the ability to unilaterally walk away from the treaty) within the organization. Weiyi Shi (UC San Diego) and Lauren Prather (UC San Diego) discussed how the role of China influences Americans’ views on globalization. They questioned if a perceived rivalry with China makes Americans less likely to support trade with China, with allies, and with the world more generally. 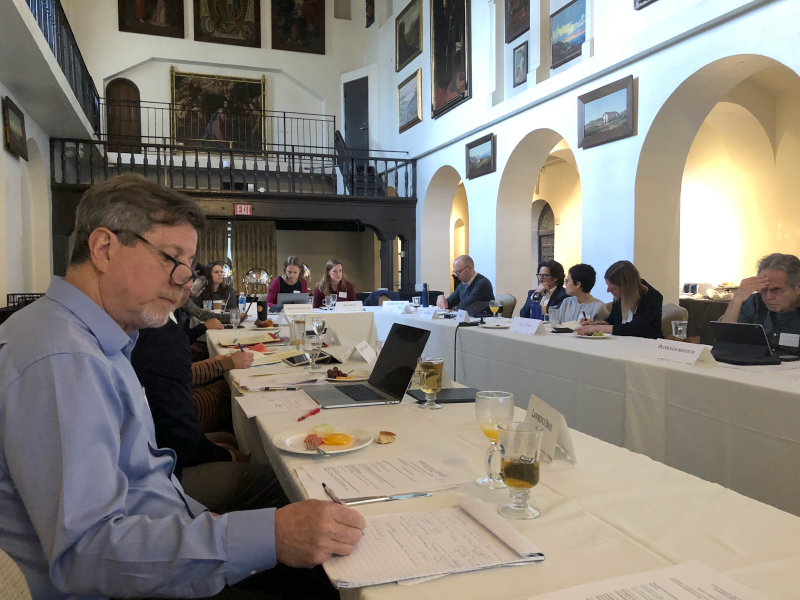 Several papers addressed another changing aspect of the global economy: financial globalization. Today, national economies are large and the International Monetary Fund (IMF) can no longer reliably stabilize all countries during a crisis on its own. Coordinated sovereign lending has emerged. In this new system of lending, Paasha Mahdavi (UC Santa Barbara), Christina Schneider (UC San Diego), and Jennifer Tobin (Georgetown) demonstrated that lenders take cues from early entrants and the IMF: if investors offer loans, and the IMF lends with strict fiscal conditionality, other lenders are likely to follow. Erin Lockwood (UC Irvine) presented a paper that investigated the non-material forms of power associated with financial authority. To assess the power associated with financial authority, Lockwood argued, it is important to pursue empirical research that investigates the practices of authorities—particularly in their response to crises.

Puzzles associated with conflict and security were also a major focus of several papers. Barry O’Neill (UCLA) presented a paper on what scholars refer to as the “stability-instability paradox (SIP).” When two countries have access to nuclear weapons, this decreases the likelihood of a major conflict between them, yet paradoxically increases the likelihood that smaller-scale conflicts might arise. Using game theory, O’Neill discussed how we might clarify the logic of the SIP, and thereby create a bridge for academics to help policymakers navigate the paradox.

Andrew Shaver (UC Merced) closed the workshop with a paper that investigated media bias in the reporting of political violence. Specifically, Shaver presented a new dataset that demonstrates the dramatic difference between actual battle injuries and those that are shown in the media. It is vital for scholars to investigate such biases, Shaver observed, because so many scholars and policymakers rely on databases that rely heavily on media reporting to assess the costs of war and to evaluate the causes and consequences of political violence.