What’s the Role of the Academic in Times Like These?

One of the roles of academics is to step back and offer broader perspectives, beyond the headlines of the day—to make sense of underlying patterns, connect the dots, add context, and consider the longer-term implications. This task is especially important these days with the world convulsed by so many high-impact events and challenges ranging from the domestic social upheavals in the U.S. sparked by deep-seated racial discrimination, and the novel coronavirus pandemic, to tectonic shifts in the geo-strategic order moving the world closer to a new and highly dangerous Cold War centered between the U.S. and China, but also polarizing the rest of the world.

One particularly jarring recent event were calls by the U.S. president and his political allies to send in the military to quell domestic protests. The same week 31 years ago, I was a journalist reporting on the streets of Beijing and addressing the same question of whether the military would be sent in to crush pro-democracy demonstrators. We know what happened in Tiananmen Square on June 4, 1989. Fortunately for the U.S., the checks and balances in the democratic system prevented the same end result—at least for now. 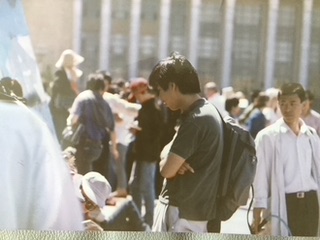 Tai Ming Cheung in Tiananmen Square in 1989, before the crackdown.

But the fact that the White House actively considered such an option shows that the world is facing the very real danger of spreading authoritarian rule, and that the democratic forces that have so successfully resisted this trend have been seriously weakened. One victim that this authoritarian turn has claimed recently is Hong Kong, with the passage of a national security law by China that puts an end to the One Country, Two Systems framework that the territory had enjoyed.

Is the world now going through rapid discontinuous change that will lead to even more turmoil and perhaps the threat of greater conflict and repression? The role for organizations like IGCC is to watch these events very closely and provide policy perspectives and solutions that can help reduce conflict and ensure peace and shared prosperity.

Tai Ming Cheung is the Director of the UC Institute on Global Conflict and Cooperation.